I put a lot of thought into the decision to train for a marathon. Not only did I put a lot of thought into it, but I also talked to my husband, Jon, about it a lot. When I started the Fleet Feet Louisville No Boundaries program 2 years ago, we had agreed it was a family commitment that I would get those 3 runs in each week. We've continued the approach that this is a family commitment, especially because I am gone a minimum of two nights a week and Saturday morning. I acknowledge that without the support and understanding of my family, then I wouldn't be able to meet my running goals. Of course, a marathon is a much larger commitment on my part and on their part.

When I first considered the commitment, I really focused on the time commitment for training. In particular, I knew Saturdays would involve hours of running and a tired mama afterwards. One reason I chose to train for my first marathon in the fall is because our training group starts at 7 am (compared to 8 am for spring training), so I would be done a little earlier.

Of course, the other part of committing to any training program, but especially a marathon training program, is the commitment to run no matter what else what is going on, including traveling. For me, it also has meant planning my traveling around my long runs. I do not want to have to run for 2+ hours by myself in a new location.

Some other travel plans fell through, so I decided to take the opportunity to visit my mom near Nashville and my dad in Columbia (about an hour south of Nashville) since we do not get to visit them often. Because Jon had never spent a night away from the kids (I have to travel a couple times a year for work, and I spend the occasional night away for a big race) and he needed time to work (being self-employed means no vacation days) and wanted time to work on his boat (yes, he's building a sailboat - it's quite amazing and was being built in our dining room until he moved it outdoors last weekend), I decided to go on my first solo trip with the kids. (You can read about his sailboat-building here - Jon Makes Things.)

Saturday morning, I got up and ran with the Fleet Feet Louisville Distance Project. 2 of my 3 regular training partners were there that morning, and the heat had finally broken. We have been working on slowing down for our long runs, and we followed our plan well that day. We started out slower than usual, and we got faster towards the end, with our fastest mile being our last mile. It was a great run!

After that, I came home, and the family headed out to Oldham County for the YMCA Family Mud Obstacle Run. Caleb and I ran a 1.8 mile trail run with obstacles while Jon and Zoe played in the bouncy house and did a little obstacle course. 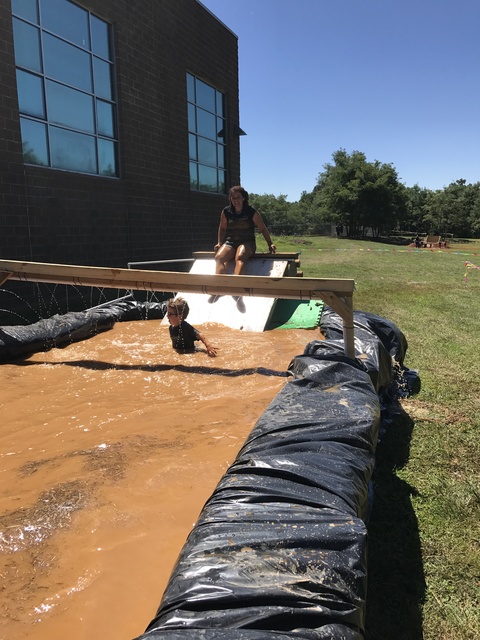 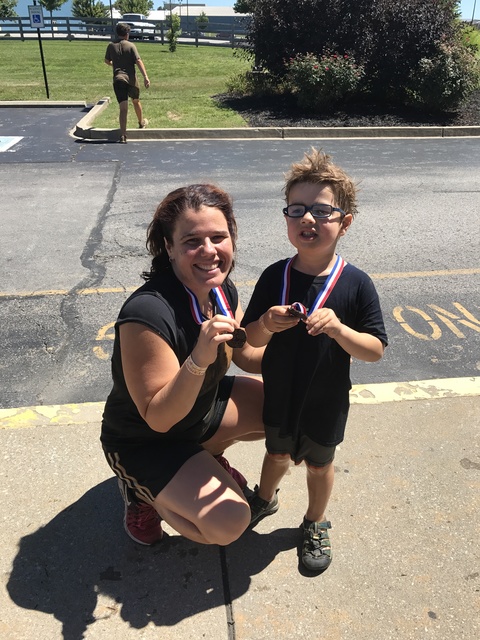 Next was shower and lunch. About 12 miles total, 28 or so obstacles, mud, not to mention not sleeping well the night before and getting up super early - the natural next thing to do would be a nap. But, in trying to balance being a mama (and daughter) and running, I packed the suitcase, including my running and workout clothes and shoes and gear, and the kid (Caleb and Zoe) and I headed to Tennessee.

So marathon training while traveling with children - #1 step I took was to get my long run in before leaving with them, even if it meant traveling on long run day. Next, I had to figure out how to maintain my training while being gone Saturday afternoon to Friday evening. Luckily, I had the support of my parents.

On Monday, I was scheduled to run 5 miles - a mile warm-up, a tempo run, and a mile cool down. My mom worked that day, and the kids and I had a relaxing day hanging out recovering from the prior two days. When my mom got home, she took the kids to the playground while I got ready for my run. Then she and my sister took the kids fishing while I went out to run. Although I was disappointed to miss my kids' first time fishing, I was grateful for the opportunity to run and for them to have that time with my family. I went to Stones River Greenway, which is a fantastic walking/biking/running path by Percy Lake Dam. I found a route that was 3 miles out, and I set off on it. I followed my training plan, with a few stops to take in the scenery and take some photos. 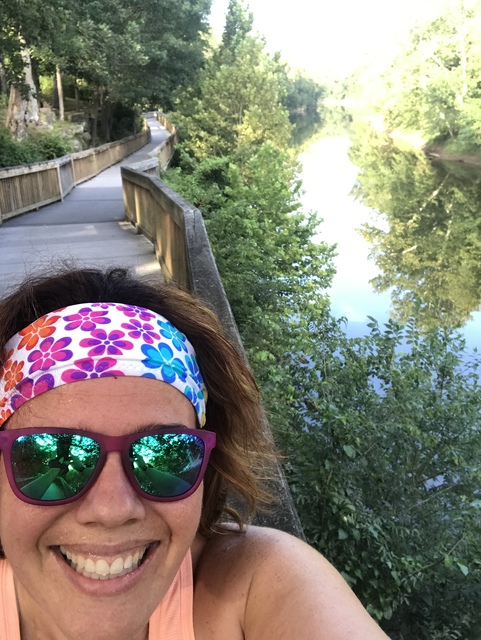 For the last month, Jon and I have been going to Orange Theory Fitness twice a week. This has given me a couple extra training miles a week as well as strength training. Luckily, the membership is good at any OTF, and there was one about 20 minutes from my mom's house. My mom agreed to hang out with the kids Tuesday morning (she didn't have to be at work until 11:00), and I got up early for a 7:30 class. Thanks to a GPS snafu, I arrived right at the start of class time, but I still got an awesome workout in - a couple miles of inclines and then strength training. Mom and the kids had fun, and I was back in time to chat with Mom, pack up, and then take the kids to feed the fish (the ducks were no where to be found), see the dam, and be on our way to Dad's house. The nearest OTF to Dad is almost an hour away, so I decided one day of cross-training this one week would be fine. 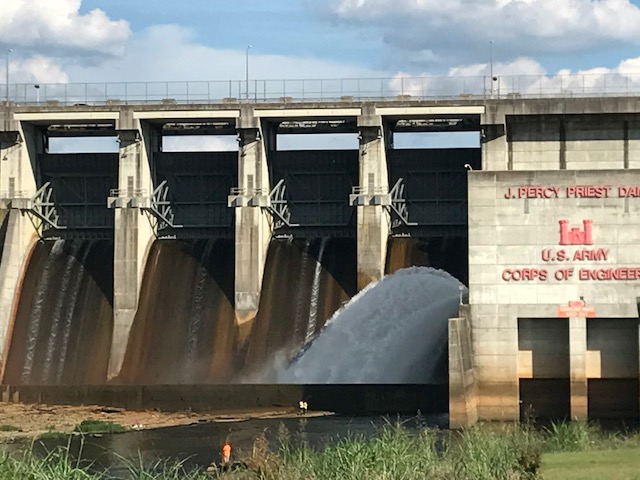 The next day was Wednesday, which is speed work or hill repeats on my training plan. This week was the first LDP hill repeat week. I have never done hill repeats on my own, but I was determined to stick to the training plan. The night before, Dad, the kids, and I drove through Maury County park scoping out the massive hills there. Dad had agreed to hang out with the kids while I went and worked out. Wednesday morning, Dad decided he and the kids were going to make blueberry pancakes, and he sent me off to run.

I drove again to check the distance on the hills as my training plan called for 400m repeats. These hills were no joke! I was dreading hill repeats by myself, but luckily, one of my running partners, Cristin, provided support from afar. Cristin is a big believer in the power of matching. Luckily, we had bought matching Goodr sunglasses, which I had brought with me, and we agreed to be matching while I ran even if she was home back in Louisville. I also wore my Louisville skyline [Ponya band](http://ponyabands.com/_ (seriously, the best headbands out there for running, and made right here in Louisville) so that I'd have a little piece of home with me. Cristin texting that she walked around her neighborhood in solidarity with me. 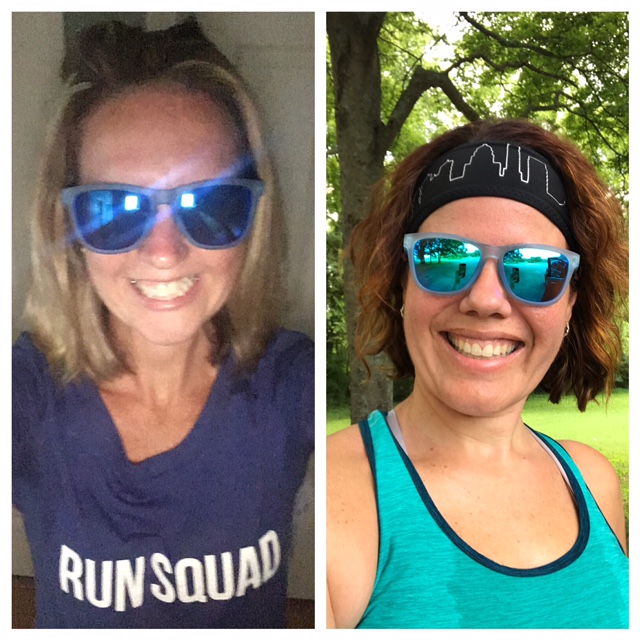 Near where I planned to start my hill repeats was the start of a trail, so I decided to enjoy a trail run for my warm-up. Being on the trail kept it shady, but it also meant some hilliness. My warm-up ended with a run down to the playground area for a brief bathroom break, then it was back to the hills. Up, up, up the hill, and then recovery back down. Up, up, up the hill, and then recovery back down. I did 6 hill repeats. I passed just a couple other runners. They tended to walk up the hill and then run. None of them were doing repeats. I have to say that hill repeats are worse when you don't see friendly, encouraging faces as you go up and down - I missed doing them with the Fleet Feet family. However, I was determined, and I did them all. 400 m hard up, 400 m recovery. I finished with another trail run to recover, although I decided to go down to the flatter area to run it after all those hill repeats.

Thursday we went swimming and Friday we drove home (with a stop to explore Lost River Cave on the way home), so that was the end of my traveling workouts. However, it wasn't the end of marathon training affecting my travels. Because of exercise-induced IBS, I have to be careful about what I eat 2 days before my long run. So no homemade macaroni and cheese for me - I made myself some food, my brother was awesome and picked me up some food, and I chose carefully where to eat while driving home. It's amazing how much marathon training affects my life beyond just the time for the training runs!

Friday night, for the first time in a week, I slept in a bed without two kids cuddled up on me. It was great trip, I kept up with my training, and after a few hours of sleep, I was up and running 12 miles with the Fleet Feet family again! (It was kind of crazy running 12 miles so early in training and not right before my goal race! Longest runs ever just around the corner!)

It is only fitting that I am typing my first #MamaisaRunner blog post while hanging out with my two kids before my evening run. I figured it would probably be best to start with how I became a runner. In 2008, I was on